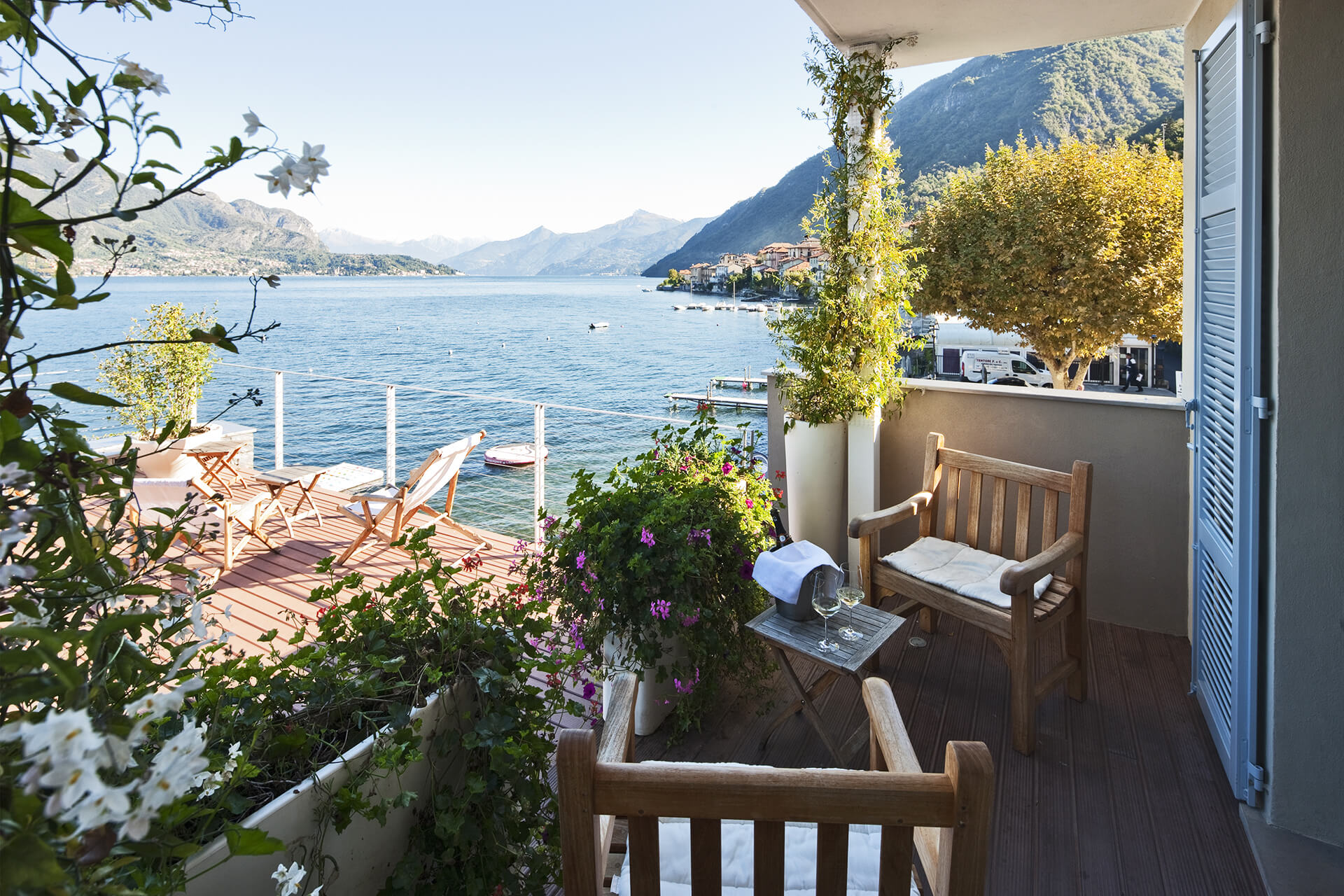 Free of charge - reservation no needed

A timeless retreat in the centre of Lake Como

Hotel Villa Aurora, owned by the Gregorio family since 1965, is located in a beautiful setting among mountains, the lake, woodland and flowers.

Situated in the main building, the Hotel dates back to the early 20th century and has preserved all the charm of the old residences by the lake but with all the modern amenities and services a guest could wish for.

Only a few metres away, the Villa, completely restored in 2009, overlooks the lake.‍‍

Both the Hotel and the Villa enjoy a spectacular view of Lake Como, Comacina Island, and the splendid Villa Balbianello, a gem of the Italian Environmental Fund (FAI) and the location of many films.

You’ll have the chance to experience life at the lake to the fullest, playing water sports, enjoying romantic candlelight dinners, and waking up every morning to the soft sound of the waves.

The strategic position of our facility will allow you to visit Lake Como’s most famous destinations and discover many more.

The Hotel Villa Aurora offers accommodation in the Hotel, in the Villa and in the Apartments equipped with every comfort and modern facilities.

Our cosy rooms, suitable for couples, families, or singles, can have a lake or mountain view. They have wooden furniture with warm and natural shades, and an en-suite bathroom with shower.

Villa Aurora was completely restored in 2009 by the famous architect, Attilio Terragni.The ten splendid rooms overlook Lake Como and one of the most beautiful views in the world.

We have two apartments (Il Molo and Il Mulino), which stand out for their furnishes and details. Professionalim, multilingual personnel, and exclusive water sports are only some of the services that make Hotel Villa Aurora special.

Enjoy a sweet awakening in the large breakfast room at the hotel. It was recently revamped with soft and delicate colours, restored antique furniture, and objects that have belonged to the Gregorio family for generations.

We also offer gluten-free breakfast so that everyone can live peacefully.

Aurora Restaurant overlooks Lake Como, one of the most beautiful views in the world.
‍
Foodies will love the simple yet authentic flavours of the dishes prepared by our chefs and paired with excellent wines chosen by the Gregorios themselves.

You’ll have the chance to experience life at the lake to the fullest, playing water sports, rent boats and electric bicycles, enjoying romantic candlelight dinners, and waking up every morning to the soft sound of the waves.

On this site, offers are available at any time of the year only for customers who book through this channel but without ever lowering the standards of quality service.

Choose the accommodation tailored for you and book your holiday at the best price on the site.

Only on the official website the best price guaranteed!

On the shore of Lake Como

The Hotel Villa Aurora located in an enchanting setting between mountains, lake, woods and flowers, in the main building dates back to the early 1900s and retains all the charm of the ancient lakeside residences.

What time can I check in?

When is it possible to check out?

Yes, pets are allowed at no extra charge.

Wonderful lake view, excellent breakfast and the hotel restaurant. Very welcoming and friendly staff. Excellent services. We will be back!

Super friendly staff and structure and services organized in detail ... view and enchanting location ... definitely recommend and probably come back!

Out of the ordinary professionalism and kindness .... a super female staff !! Good girls! Not to mention the restaurant! A real treat!

The hotel was built back in 1912 under the name Molinari Hotel and later Lezzeno Hotel. Various families have managed it over the years. Later, the name was changed to Hotel Aurora. The previous owners thought that the hotel project would not be successful, so they had two stairways built to create to private residences.In 1965, the hotel was purchased by the Gregorio and Pellolio families. Their grandparents – Pierino and Maria and Adone and Carolina, the family poet who died centenarian in 2008.
In 1960, the family started growing and Ivan, Adonella, Piero, and Stefano were born.At that time, the hotel had only one star, ten plain rooms and a small restaurant on the terrace. Domenico and Silvia put all their hard work and passion to manage the hotel and restaurant, while Lidia prepared delicious dishes in the kitchen, her kingdom.

In 1975, Vanni, a passionate motorboat racing champion, inaugurated the Jolly Racing Club – one of Lake Como’s first water skiing schools – and specialised in water ski racing, introducing his children and grandchildren to this sport.
‍
For Stefano, Piero, and Ivan it was the beginning of a long journey in the world of sports, while Adonella devoted herself to music.
‍
A great career in sports led Stefano to become world water ski racing champion in 1995 in Viersel, Belgium, coached by his brother Piero, the Captain of the Italian national team. That same year, Vanni, Lidia, and Ivan decided to leave the activity and Stefano and Piero stepped in to manage the hotel and restaurant, always with Domenico and Silvia.Stefano takes care of the kitchen, while Piero runs the water skiing school, although he has left races for wakeboarding.

Meanwhile, the family kept growing. Piero married Margherita and Stefano, Patrizia. Soon after, Gionata, Mattia, Giorgia, Niccolò, and Martina were born. In 2002, the wives decided to join the business and continue to the tradition.

In just a few years, the hotel went from one to 3 stars.

The hotel and restaurant were completely restored, and the construction of the beautiful Villa Aurora was completed in 2009.While working at the hotel, Silvia has always managed to make time for her other passion: watercolour painting.In the meantime, the children have become passionate wakeboarders, and in 2009,became world champion in South Korea, at the age of 12. In 2010, she became European champion in Sweden.After becoming a top athlete, she became a member of the Italian national wakeboarding team.

© Bedzzle Your Hotel. Made in Italy by BEDZZLE SITES
only here:
the best price guaranteed!
details

Our activities in relation to the COVID-19 pandemic